Being selected to an All State team in any sport is a great accomplishment.

Being selected to All State teams in two sports puts you in rare company.

In 1995 Tara Malcolm was named All-State in basketball and track joining a select fraternity of student athletes. 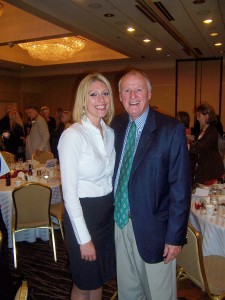 Tara was an outstanding basketball player, starting all four years and making ALL-Conference for 3 of those years.  She finished her career with 965 points after averaging 15 points a game her senior year.

Tara continued her basketball career after receiving a scholarship from Assumption College. He scored 751 points and had 564 rebounds during her four years as a Lady Hound.

Tara graduated Windsor Locks High School in 1995.  Tara earned a degree in biology from Assumption in 1999.

She returned to school at UMass and became a registered nurse. Later she completed the nurse anesthetist program at Northeastern University.

Tara and her husband Peter Phelps live in Wakefield Rhode Island. Their family totals 5 children. Tara has coached two of her children in basketball.

Tara and Pete like to camp with the children during the summer. They also spend time at the local beaches.   Tara was versatile athlete in high school and college and she continues to show her versatility whether at work or as a mother.