Peter Preli, a lifelong resident of Windsor Locks, has not only been involved with youth sports for most of his adult life, he has been most generous with his time and the spirit of volunteerism.   Most of his endeavors have involved Little League, but he has been active in other sports as well.   Peter was President of the Windsor Locks Little League for 5 years, has been equipment manager for Little League for 22 plus years and has been District Administrator for 18 plus years.   In addition to his administrating activity, he found time to coach softball for two years. 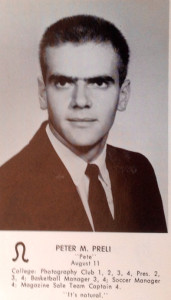 When not occupying his time with Little League related activities, Peter squeezed in 2 years of coaching youth soccer followed by 6 years of coaching High School Junior Varsity Girls Soccer.  During the winter months, when the fields were frozen, Peter found his way into the local gymnasiums and ran the Park and Recreation Department Girls Basketball program for 5 years.   To fill in the little spare time he had left, Peter has been keeping score for the High School Girls Basketball program for 20 plus years as well.

Pete graduated from WLHS in 1965, attended the UConn Hartford Branch for a year, worked at Kaman Air Craft in Windsor Locks and then entered the US Army from January 1968 until September 1970.  He used in newly learned skill from Kaman while serving as a helicopter mechanic, crew chief and rotary wing technical inspector.

Pete was married to the former Ellen Willey in August, 1974 and has resided in Windsor Locks since then.  They have two children, Carla and Joseph.

Pete worked at Northern Connecticut National Bank November 1970 to October 1972 moved to the Hartford Insurance Group as a computer operator and then moved onto Combustion Engineering as a Senior System Programmer working on IBM Mainframes for nineteen and a half years.   Presently, Pete works for CDI Corporation as a contract employee assigned to IBM in Southbury as an Intel Systems Administrator on the ACE Insurance Account.

Peter Preli has been an outstanding contributor to the Windsor Locks youth sports scene long after his own children moved on.  Many local youth have been the beneficiaries of his involvement behind the scenes and as a coach, administrator and scorekeeper.  Peter is hoping to wind down his activity as he retires and get reacquainted with a long lost love of fishing.  We know that we were fortunate and that Windsor Locks is a better place for having Peter Preli as an involved citizen.