In only its second year as a varsity team teams the Raiders defeated Northwest Regional at its favorite field, Sterling Field, in West Hartford. Even more remarkable, many of these players had been only playing soccer 1 to 3 years. Some of them were even recruited out of gym class.

In the early days of soccer only 8 teams qualified for the tournament. After winning the Charter Oak Northern Division in regular season with a 7-4-1 and rated number 7 in the tournament, the Raiders continued their remarkable journey in the state tournament.

First up in the state tournament was Rockville, and the Raiders won 1-0. Dave Draghi, the goalie, broke his leg during the game, and Charlie Zien filled in admirably. 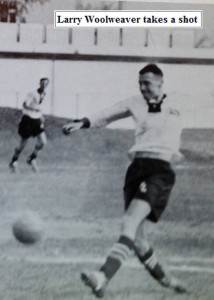 In the semi-finals, the Raiders defeated conference opponent Bloomfield, 3-1. Goals by Dana Lee and Peter White led the offense, with Charlie Zien playing great in goal.

In the finals the Raiders defeated Northwest Regional 1-0 with Larry Woolweaver scoring the game-winning goal. Good defense again led the way. In three tournament games the Raiders outscored the opposition 5-1.

Coach Sullivan was quoted as saying the key to success this year was wonderful spirit and the desire to play hard and win. 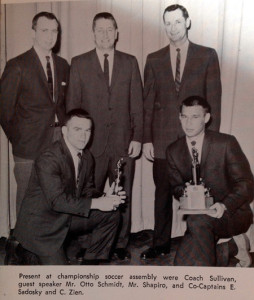 The Raiders concluded the season with a 10-4-1 record. They scored 25 goals and gave up 9. High scorers were Charlie Zien, Al Lee and Peter White. Good defense led to 9 shut-outs. Winning in 1963 was the first of six state soccer championships for Windsor Locks High under Coach Dan Sullivan.

With many returning players, the team was looking for another successful season. After having a regular season record of 7-3-2 and winning the Northern Division of the Charter Oak Conference, things came in threes for the Raiders in the tournament. In their first tournament game, the Raiders tied South Windsor 3-3 but won the game by having more corner kicks. Next, loomed one of the favorites in the tournament– E.O.Smith. The Raiders defeated E.O. Smith 3-1 with Bob Morrell scoring his only goal of the season late in the game to break up a closely fought contest. Gary Handschumacher and Larry Woolweaver scored the other goals. Bill O’Neill, Ernie Sadosky, and Charlie Zien were standouts for the game. 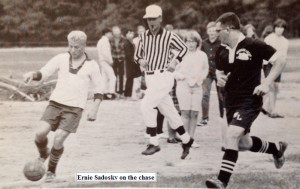 In the finals– again played in Sterling Field in West Hartford– the Raiders easily defeated Lewis         Mills 3-0 to win their second championship. Dana Lee scored a goal and Larry Woolweaver scored 2 goals to lead the Raiders’ offense. For the second year in a row, the Raider defense shut-out the opposition in the finals. Again Coach Sullivan was impressed by the Raiders’ hard work and desire. In both 1963 and 1964, the Raiders tied Hall High in preseason scrimmages. Hall High had won the Class A Soccer Championship in both ’63 and ’64. Juniors Dana Lee with 8 goals and Larry Woolweaver with 7 led the Raiders in scoring. Charlie Zien and Gary Hand Schumacher both scored 4 goals. Junior Bob Devlin scored 3 goals. The defense, led by Ernie Sadosky, rose to the occasion to help the Raiders secure their second state championship in a row.