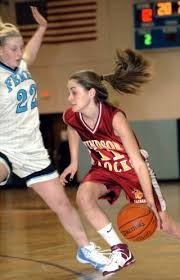 As a graduate of the class of 2007, Brittany Whiteley was a successful student athlete throughout her four active years at Windsor Locks High School.

Brittany found her true calling on the field and court where she shined as an athlete.  Brittany was a three sport athlete and received numerous accolades for Softball, Soccer and Basketball.

As a Senior, Brittany was a captain and earned MVP for each sport.  She received All-Conference for Softball and Soccer her Junior and Senior year; All-Conference for Basketball all four years; made All-State for Softball and Soccer her Senior year; and made All-State for Basketball her Sophomore and Junior year. Brittany also scored over 1000 points in her high school hoops career.

In addition, Brittany was named the best defensive player in Softball and won the Coaches Award in Soccer and Basketball.

As a graduate of the class of 2007, Brittany Whiteley was a successful student athlete throughout her four active years at Windsor Locks High School.

In addition to her collegiate education, Brittany played basketball for four years at Eastern and was a starter and captain her junior and senior years.  During her senior year, Brittany won the MVP award by participated in the tip-off tournament in her senior year.  Brittany was also awarded the Holly E. Zimmerman Memorial Award.

This award is given to a female junior or senior with a major in Health and Physical Education or Sports and Leisure Management. Candidates must have also made significant contributions to the Eastern Intercollegiate Athletic Program as either members of an athletic team or as student athletic trainers with an overall grade-point average of at least 2.70. The candidates must reflect Holly Zimmerman’s qualities of loyalty, thoughtfulness and academic determination, which Brittany demonstrated on and off the field.  Brittany is currently attending Central Connecticut State University for Masters in Physical Education.