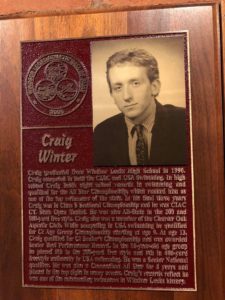 Craig Winter began his athletic pursuits as an average athlete. He played baseball, soccer, basketball and golf and enjoyed them all. At the age of 7 he was introduced to competitive swimming and found the sport at which he excelled.

In his earlier years, Craig  swam all events yet excelled at freestyle. He usually swam the 50, 100,200 and 400 freestyle and excelled at the 200 yard event.

Craig held 8 WLHS records as a junior in high school and continued his competition on a larger scale. His name filled the record board at the high school pool and he was an inspiration for many swimmers who followed him in the local pool.

All Star competitions began at age 12 for Craig and that is when his abilities and dominating ability showed. At the All Star meets Craig was rated as one of the top two swimmers in each event he swam. He represented Connecticut in competitions that involved swimmers along the eastern seaboard from Maine to Virginia. In the 15 – 16 age group, in addition to swimming for the high school team. Craig continued to swim on weekends against higher level competition at the USS level. He reached the finals in all events and won several age group events.

In addition to WLHS records that Craig has, in March, 1989 Craig was on two relay teams that set Connecticut swimming records in the 200 and 400 yard freestyle that still stand.

Craig was described as a coaches dream because of his dedication to four hour a day workouts and his competitive nature in the water.

Craig’s fame never got the best of him. It was reported that if you didn’t read the paper, you would never know he w’as a champion swimmer. 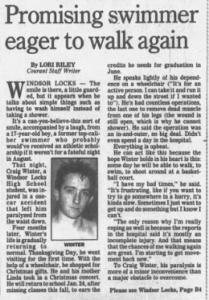 In August, 1989 Craig was a passenger in automobile that was in an accident and left him paralyzed from the waist down. The accident ended his dreams of swimming at the collegiate level and Olympic caliber swimming.

Craig was a kitchen and bath designer for LCN 4 Seasons. Craig had a warm smile, a firm grasp on life and was anything but average.