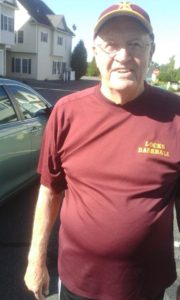 Don Gilbert became a fan of Windsor Locks sports when his family moved to town in 1950.  66 years later he still one of its biggest fans.  In his youth Don could be found playing baseball and basketball at the local parks and gyms.  He spent many years watching his children’s games.  But  true fans go to the games for the love of it, not because they have a kid playing.  Don showed he is a true fan by continuing to loyally follow Raider sports long after his kids were no longer playing.

His allegiance to Raider baseball got him a seat on the bus to road games and a trip to Florida with the team for spring training.   A longtime Red Sox fan,  he nonetheless got a kick out of meeting Bucky Dent  during that trip to Florida. Don  had also been an avid follower of American Legion Post 36 baseball for many years.

Don has 6 grandchildren: Brandon Ryan, Jason, Jimmy, Kayla, and Benjamin, ensuring that his days of watching sports are far from over.  Brandon, Ryan , and Jason played varsity basketball at Windsor Locks High School. Jimmy plays Little League baseball and hockey. Kayla played basketball. Benjamin plays hockey. Don now has a great granddaughter to follow, Marly, who no doubt will be “suiting up” soon. 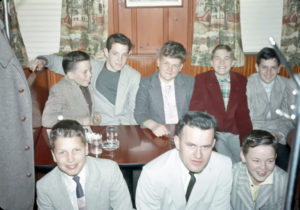 When he is not watching sports Don likes to play golf and to help his son coach Park and Rec basketball.  Don has probably lost count of the number of games he has seen over the last 6 decades.  But the athletes from Windsor Locks could always count on him to be there rooting them on.  And that type of dedication earns you the title of “Fan of the Game.”