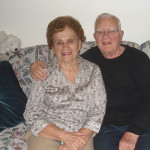 Roland and Rita Murdock – The Murdocks moved to Windsor Locks in 1956.  They raised 3 daughters.  Susan Lives in Somers, Marjorie in Millers Falls, Massachusetts and Peggie in Agawam.  They have 5 grandchildren: John, 35, Karen, 33, David, 31, Courtney, 24, and Jack, 22 years of age.  They have a one-year old great-grandchild, Ryan who lives in New Mexico.

Roland did government work for many years.  He had 28 years of federal service as an aerospace engineer.  He retired at Hamilton Standard.  Rita stayed at home to take care of her children.  Later, she became a substitute teacher in Windsor Locks.  The family spent many hours at their summer home on the Cape.  Now, they spend some summer time in Maine.  They have traveled to Europe and the Caribbean.  They have visited California and New Mexico.

The Murdocks like to play bridge.  Rita likes to work out at the fitness room at the Enfield Senior Health Center.  Roland has been a member of the Lions Club for 32 years, volunteering many hours. He was president from 1982-83.  Since the children left, for about 15 to 20 years, they supported Raider’s Boys Basketball.  Fans of the game, you bet, as they sat on the coach’s side.