Lou graduated from Hartford Public High School in 1952, where he played football, basketball, baseball and track.  He then went into the Army and served his country in Korea.  Upon his return from the service, he started, coached and played on a fast pitch softball team that was part of the Greater Hartford Softball League.  His team 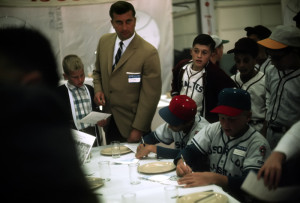 competed against some of the best teams, including the storied Raybestos Softball team.  His greatest memory is hitting a grand slam home run in the last inning to win the game which was played at the Wethersfield Prison.  The greater accomplishment was that the ball left the prison yard, sailing over a wall that was 3  4 stories high.  Lou moved to Windsor Locks in 1960.  He became involved in Windsor Locks winning tradition first as a spectator, and later as a coach trying to continue to promote that winning tradition.  He credits Bob OConnor, Recreation Director at that time, for involving him in youth sports in the Town of Windsor Locks.  Along with Bob and another Hall of Fame inductee Spud Shapiro, the fundamentals of the game, the dedication to the improvement of ones skills and the joy of participating in sports became the guiding forces.  He coached Midget Football in 1969 as an assistant to Bill Stone, another Hall of Famer, and became the head coach for the next three years where his teams won 3 district titles and in 1972, his team won the State Championship.  He coached Little League baseball for ten years from 1966  1975. During that time, his teams won three league titles.  He coached several of the All Star teams and assisted Russ Mattesen in coaching the 1972 Little League State Championship team.  During the winters for six years, he was one of the coaches for the Sixth Grade All Star teams, along with Russ Mattesen, Don Pisati and David Johnson.  In soccer, he was also successful in winning league titles while coaching his sons.  He later went on to coach a Windsor Locks team in a womens slow pitch softball league for three years, winning one league title.  He worked individually with several of the players on the 1978 Windsor Locks Girls Softball Team that won the State Championship.  In 1976, he was honored as the VFW Sportsman of the Year.