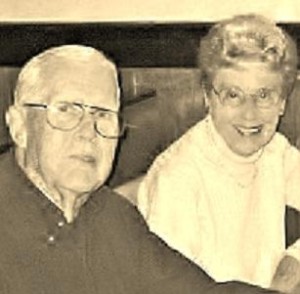 Joan and Fred Allen became Raider fans not long after them moved to Windsor Locks in 1958. Years later, and long after their children were no longer participating, Joan and Fred continued to follow Windsor Locks sports. They could be seen in the stands at most WLHS basketball games. During the high schools baseball team’s memorable championships runs in 2005 and 2006, the Allens barely missed a game. They were ardent fans of American Legion baseball team, often attending the Legion tournament at Muzzy Field.

Joan was an elementary teacher for nearly 30 years, teaching grades 4 and 5 primarily at the North Street School. Fred worked 20 years for Ensign Bickford. He then finished his career at Hughes Aircraft. The Allens raised two children. Peter, who graduated Windsor Locks High School in1977 was all-conference in basketball. His younger brother Michael graduated in 1979. Michael played basketball and football at WLHS.

After their retirement, the Allens spent the winter months in Naples, Florida. In the summer they enjoyed the beach and fishing off their boat, particularly in Narragansett, Rhode Island. The Allens have been blessed with 4 grandchildren, Seth 28, Jamie 23, Zachary 19, and Elizabeth 17. The also have one great-grandchild, Aubree, 5 months.

Fred recently passed away and health does not permit Joan to attend games any longer. However, their past devotion to Windsor Locks sports has earned them the title of “Fans of the Game” for 2015.