Ask anyone born before 1940 who was the best baseball player to come out of Windsor Locks and the answer will be unanimous: Joe Barberi.

Before a beaning ended his career, Joe was on the doorstep of joining “the show” with the St. Louis Cardinals.

Joe played in an era 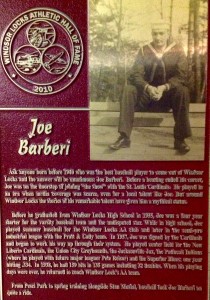 when media coverage was scarce, even for a local talent.   But around Windsor Locks the stories of his remarkable talent have given him a mythical status.

Before he graduated from Windsor Locks High School in 1935, Joe was a four-year starter for the varsity baseball team and the undisputed star.

While in high school Joe played summer baseball for the Windsor Locks AA club and later in the semi-pro industrial league with the Pratt & Cady team.

In 1937 Joe was signed by the Cardinals and began to work his way up through their system.  He played center field for the New Liberia Cardinals, the Union City Greyhounds, the Jacksonville Jax, the Paducah Indians (where he played with future major leaguer Pete Reisor) and the Superior Blues, one year hitting .334.  In 1938 he had 159 hits in 135 games including 32 doubles. One spring training Joe got to play alongside Hall of Famer Stan Musial. 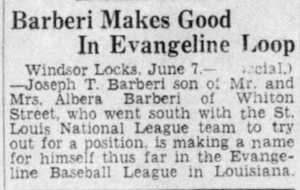 When his playing days were over, he returned to coach Windsor Locks’ AA team.

In 1943 Joe married Ernestine.  They eventually settled in Newington, where they raised their daughter, Jane.  He served in the Navy during World War II.

After he was discharged in 1947,Joe took a job with Pratt & Whitney. Later he opened his own machine shop with Pratt as his largest customer.  Joe died in 1998.

From Pesci Park to spring training alongside Stan Musial, baseball took Joe Barberi on quite a ride.