Larry Lichstein grew up in Windsor Locks in the shadow of Bradley Bowl. He watched bowling on television and began honing his skills at an early age. Larry discovered he could make money bowling and continued to improve his game against better competition.

In 1967 the fiery lefty from Windsor Locks was the first bowler ever to roll a perfect game in the Connecticut State Tournament; he was the New England Bowling Association Bowler of the Year in 1968 and began a five year stint as a PBA touring professional in 1969 when he was named the Sporting News PBA Rookie of the year. Larry placed third in the 1969 and 1970 PBA National Championships. 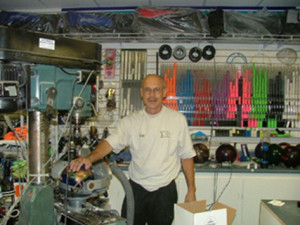 In 1971 he won the PBA Ebonite Open and two weeks later was the runner up in the PBA Winston Salem Open, all on national television. Larry also won the Landgraf Classic Championship in 1971. He was a four-time PBA Eastern Regional Champion and four-time NEBA Champion. He was the third bowler of the century to win back to back titles in his first two ABC tournaments. At a very young age, Larry was bowling against the top bowlers of the time and more than holding his own. He is very proud that the legendary Dick Weber was influential in Larry’s being the first left hander signed to the AMF advisory staff.After Larry ended his touring as a PBA Bowler, he began a second career as the Player Service Director on the Professional Bowlers Tour from 1974 to 1996 and was inducted into the PBA Hall of Fame for Meritorious Service in 1996. This induction was a prestigious affair as he was only the 22nd individual inducted to the PBA Hall of Fame. He was also inducted into the Central Connecticut Bowling Association Hall of Fame in 1996 and the Connecticut State Bowling Hall of Fame in 1997. Larry now resides in Fort Myers, FL with his wife, Kathleen, and son, Larry, and runs two pro shops in Florida. He still has interest in the area as his son, Mike, runs the Litchco’s Precision Pro Shop at Bradley Bowl.