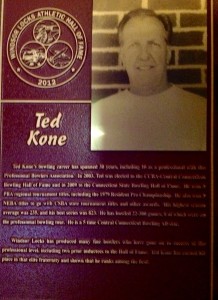 tournament titles, including the 1979 Resident Pro Championship.  He also won 3 NEBA titles to go with CSBA state tournament titles and other awards.  His highest season average was 235 and his best series was 823.  He has bowled 22- 300 games, 8 of which were on the professional bowling tour.  He is a 5 time Central Connecticut Bowling All-star.  In 1980, he was part of the King of the Hill Series at both the Bradley Bowl (6 matches) and Waterbury (7 matches).  He won 12 of the 13 matches while averaging 243.

Ted’s family moved to Windsor Locks in 1954.  He was one of 4 children. He graduated from Windsor Locks High School in 1966.  He played many sports through his high school years.  From 1966-1972 he was in the Air Force, spending four of those years in Vietnam. Ted has a daughter, Patty, and a granddaughter, Callie.  Ted moved to Hartland in 1982.  In 1985, he started his own trucking business.

Windsor Locks has produced many fine bowlers who have gone on to success at the professional level, including two prior inductees to the Hall of Fame.  Ted Kone has earned his place in that elite fraternity and shown that he ranks among the best.