Ted Netcoh was involved in athletics all his life, including the 39 years that he resided in Windsor Locks. A Hartford native, he played baseball and football at Hartford Public High and then proudly served his country as a corporal with the U.S. Marine Corps.  He married Lorraine Russell and then settled in Windsor Locks where he 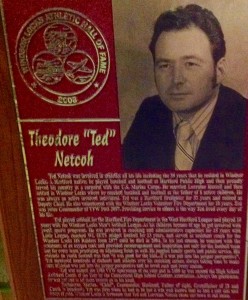 coached baseball and football as the father of 8 active children. He was always an active, involved individual.  Ted was a Hartford firefighter for 33 years and retired as Deputy Chief.  He also volunteered with the Windsor Locks Volunteer Fire Department for 10 years.  Ted was twice Commander of VFW Post 2097.  Providing service to others is the way Ted lived every day of his life.

Ted played softball for the Hartford Fire Department in the West Hartford League and played 10 years with the Windsor Locks Men’s Softball League.   As his children became of age, he got involved with youth sports programs.  He was involved in coaching and administrative capacities for 15 years with Little League, coached WL JETS midget football for 13 years, and served as assistant coach for the Windsor Locks HS Raiders from 1977 until he died in 2004.  In his last season, he coached with the assistance of an oxygen tank and provided encouragement and inspiration not only for the football team but also for every team practicing on adjoining fields as well.  He juggled family sports and public service.  His attitude on youth football was that “it was good for the kids…if it was put into the proper perspective”.  Ted mentored hundreds of students and athletes over his coaching career, always taking the time to make sure athletics was put into the proper perspective and he loved each and every season.

Ted was named the 1986 VFW Sportsman of the year and in 1999 he was named the High School Assistant Coach of the Year by the Connecticut High School Coaches Association. Always the gentleman, he was not one to let these honors go to his head.

Ballplayer, marine, “Chief,” Commander, husband, father of eight, grandfather of 18 and coach to hundreds, Ted was firm when he had to be, but it was well known that he had a soft side and heart of gold.  Windsor Locks is fortunate that Ted and Lorraine Netcoh chose our town to call home.