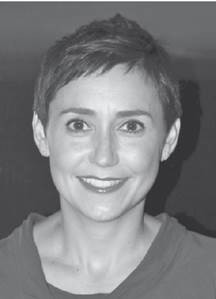 At just 5 feet and 105 lbs., Trina Quagliaroli was not a typical hurdler.  Often competing against much taller opponents, this class of WLHS graduate was, nevertheless, a formidable foe who used her small stature as motivation for higher achievement.

“Even though she is 5 feet, Trina is very strong and very coordinated,” said her high school coach, Jim O’Brien.  “Once she started doing the hurdles, I never wanted to take her off.”

It’s a good thing that Coach O’Brien didn’t take her out of the hurdling events, as Trina still holds record times in the 55, 100, and 300 meter events almost 30 years later.

Trina was a dual conference champion in outdoor track as well as a 2 time All-Conference selection. She was the state champion in the 300 meter hurdles in 1989 and was selected to the All-State team.

Trina was undefeated in dual meet competition in 1989 in the 100 meter hurdles and lost only once in the 300.  Highly respected by both her teammates and her coach, Trina was named the Raiders’ captain for both her junior and senior years. 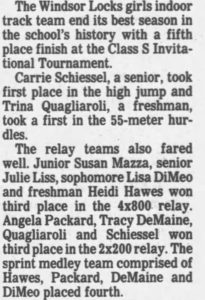 Upon graduation, Trina headed to Japan for one year to teach English.  She then moved to New York City and began working in documentary film production for PBS, ABC, and HBO Sports.  Her career highlight in film-making was working as an associate producer on the Emmy Award-winning and Academy Award-nominated PBS documentary on the Scottsboro Boys case.

She later attended the French Culinary Institute and has most recently been managing large food and wine festivals.

Trina currently lives in Washington, D.C., with her husband, Michael Harris, and her son, Owen.