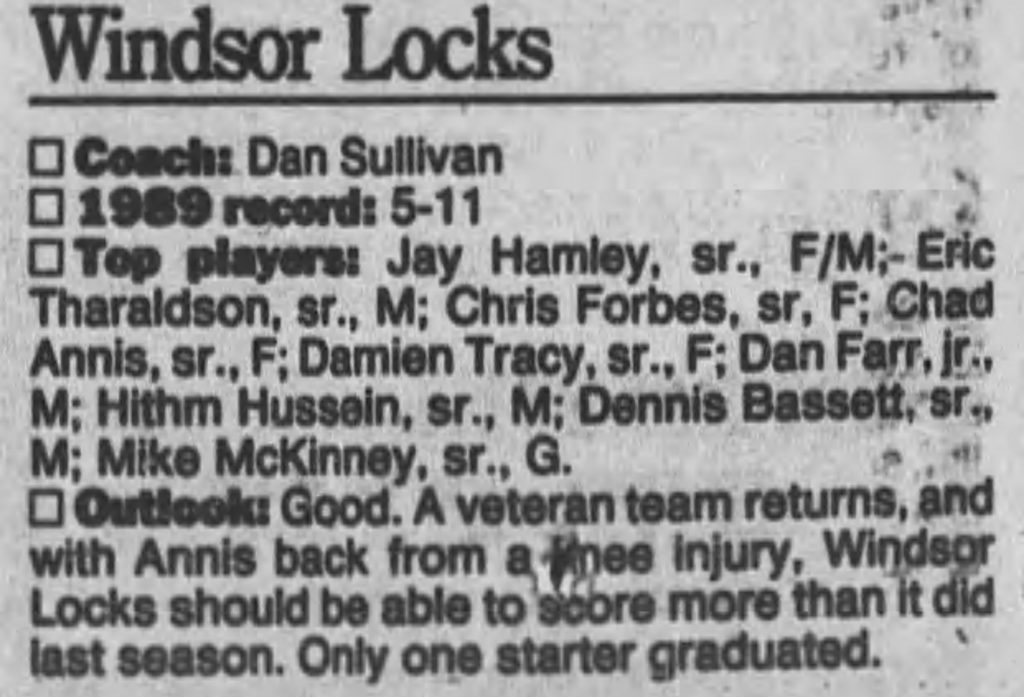 The 1990 Windsor Locks High School Boys Soccer Team welcomed in another decade of soccer dominance with an overabundance of heart, hustle and aggressiveness, all trademarks of legendary coach Dan Sullivan.

Led by co-captains Jason Hamley and Hithm Hussein, the team compiled a 9-4-3 regular season record finding them 5th in the NCCC conference, which featured some of the best teams in the state. 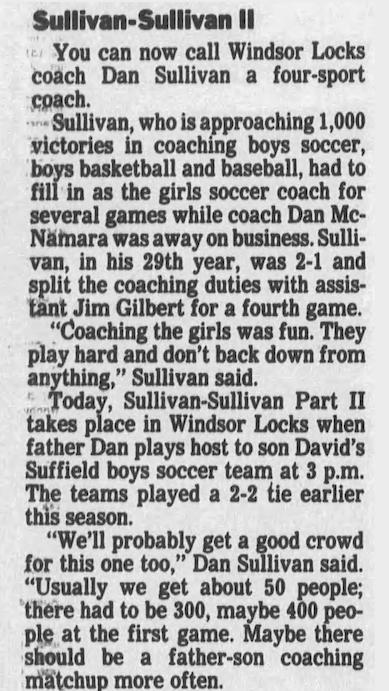 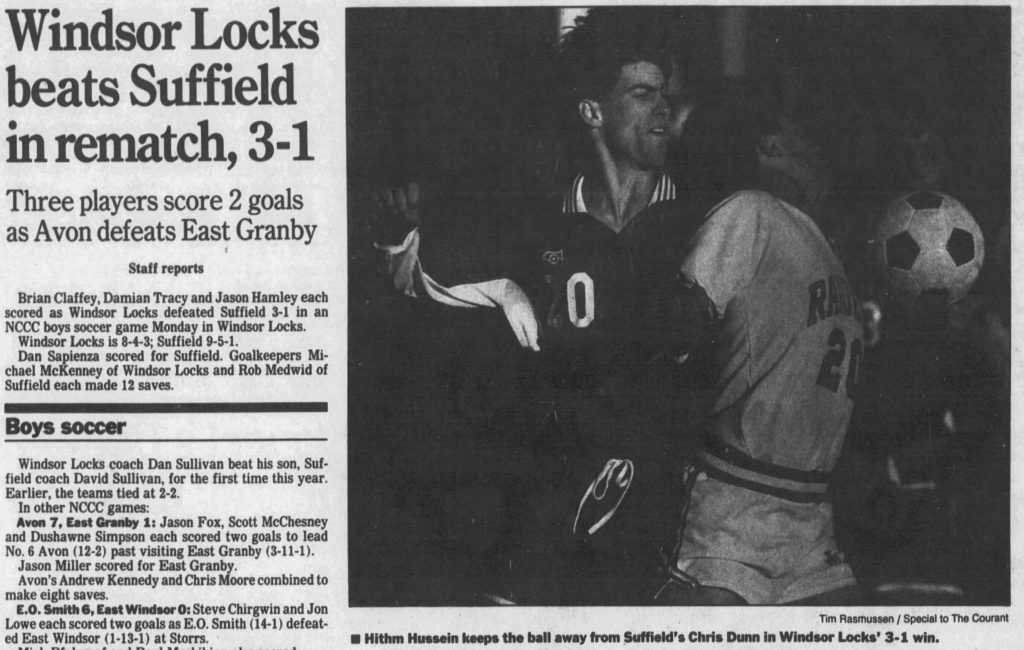 The Raiders qualified for the state tournament as the 12th seed with the help of strong midfield play from Hussein, Dan Farr and Dennis Bassett. 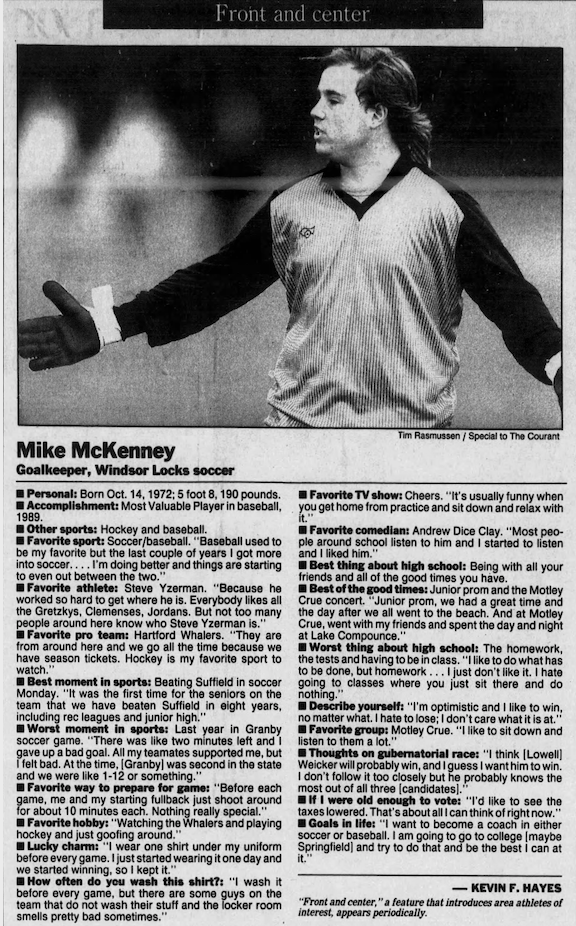 In the opening round, Windsor Locks, with its speed advantage, played 5th ranked Old Lyme, with its size advantage.  The game was extremely physical and with less than 20 minutes remaining, Brian Claffey was fouled in the penalty area.  Bassett’s successful penalty kick provided the 1-0 victory.  McKenney was a force in goal, finishing with 12 saves, including a dazzling stop on a breakaway late in the first half to keep the Raiders in the game.

The Raiders easily beat 13th ranked Terryville 3-0 in the second round.  With only seconds left in the first half, a great steal and cross by Farr resulted in a scramble in front of the goal before the ball was finally knocked home by Hamley.  A spirited halftime speech by Coach Sullivan resulted in a dominating second half performance as Terryville could barely get the ball out of its own half of the field, even with 20 to 30 mph winds at their back.

Team leading scorer Damian “Flip” Tracy was taken down in the penalty box, and Bassett made it 2-for-2 in penalty kicks to give the Raiders a 2-0 lead.  Tracy tacked on the third and final goal with a blast from long range.  The defense limited Terryville to only 4 shots in the game as Windsor Locks advanced to the semi-finals.

The semi-final matchup against 8th ranked St. Thomas Aquinas was arguably the most exciting game of the tournament.  While it did not show on the scoreboard, Windsor Locks dominated for a second tournament game in a row.  The Raiders had numerous scoring chances, including Tracy, Hamley and Bassett all having second half opportunities that hit the crossbar.  Hussein and Ciarcia teamed up to defuse Aquinas’ star offensive player who had scored 30 goals on the season coming into this game. 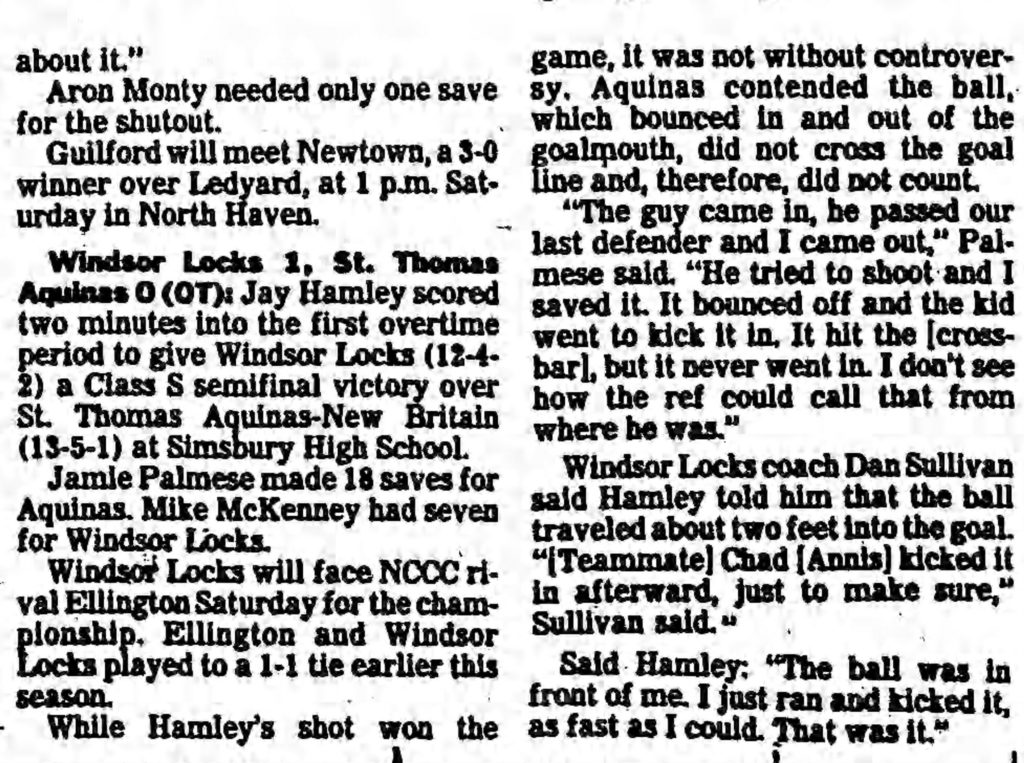 After playing to a scoreless tie in regulation, it was less than two minutes into the overtime session before a Tracy pass allowed Hamley to slip behind the defense.  Hamley’s first shot was blocked by the goalkeeper, but he hammered the rebound off the crossbar and into the goal.  The thrilling 1-0 sudden death overtime victory gave Windsor Locks a shot at its fifth state soccer championship. 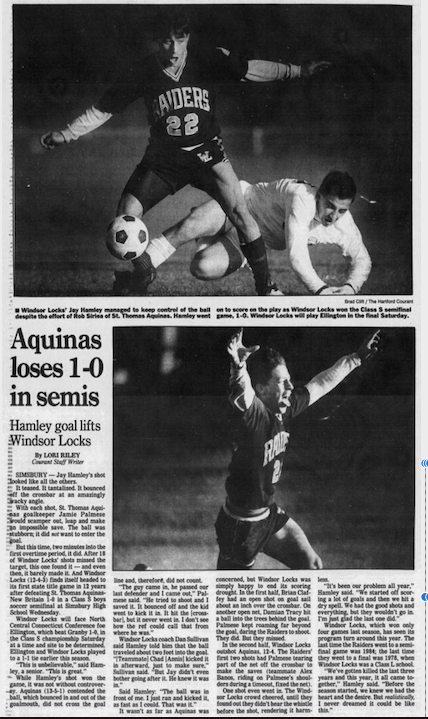 The championship game featured the quick and aggressive Raiders against fellow NCCC opponent and 11th ranked Ellington, a well-skilled team. 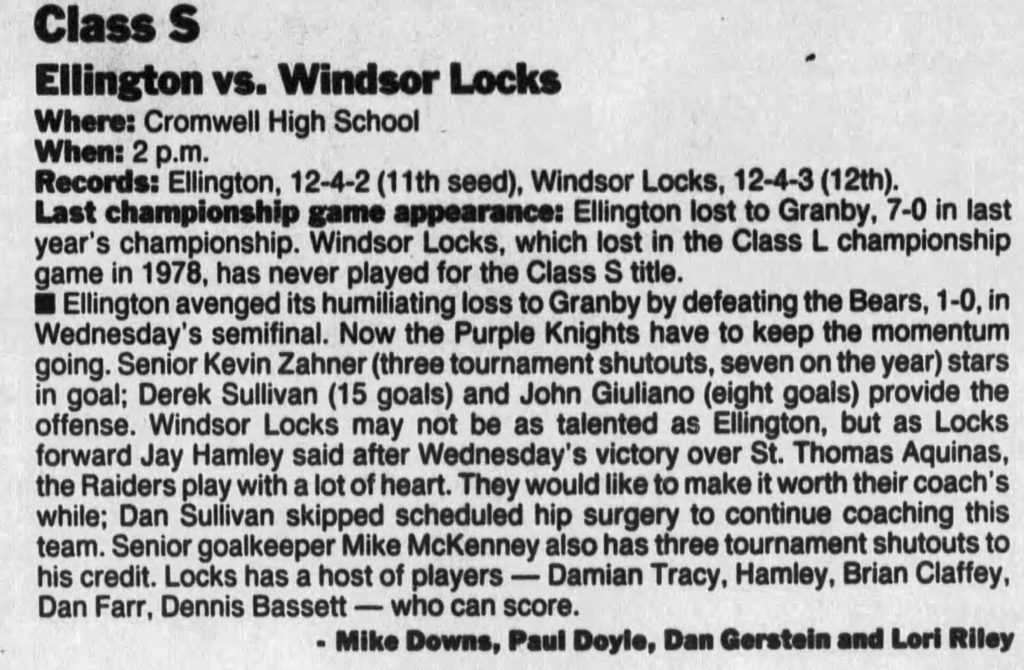 A goal by Claffey off a Tracy deflection gave the Raiders the lead just before halftime.  The game’s second half was hard fought and the defense, led by goalkeeper McKenney, who made several vital saves in the final 15 minutes, preserved the 1-0 win.  It was McKenney’s fourth shutout of the tournament, eleventh on the season, and it helped propel Windsor Locks to its fifth state soccer championship.

Four starters from the championship team, Barthel, Ciarcia, Hamley and Zwizinski, all found future athletic success at the collegiate level.

The four tournament wins brought the team’s final record to 13-4-3 and continued the Windsor Locks tradition as a soccer powerhouse.

Many believe it was the team’s dominating performance in the state tournament that sets them apart from other championship teams. 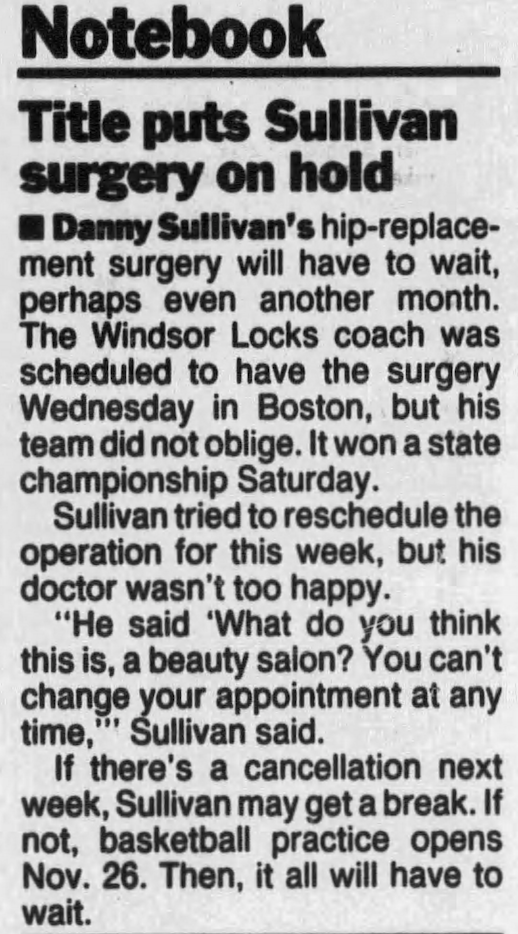