Pete Maltese has been an active volunteer in the Windsor Locks sports community for almost forty years. 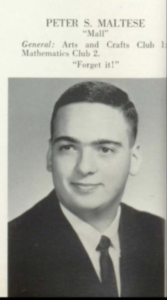 Although he was a little league participant himself in the 1950’s , played in the Windsor Locks Softball League for over twenty years, and was a high scoring sharpshooter in the men’s hoop league, Pete is best known to many residents in town for volunteering in numerous youth sports programs. 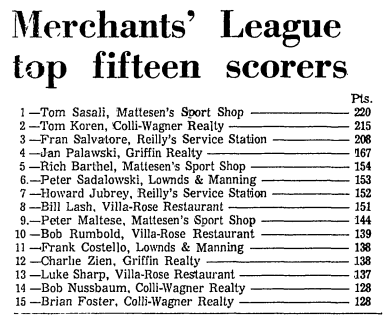 Beginning in 1981,  Pete was a volunteer basketball coach at Windsor Locks Middle School for students in Grades 1-4.  He spent 8 winter seasons with Rich Labbe helping athletes improve their skills.

Starting in the spring of 1983, Pete began his baseball coaching career in the T-Ball division.  He coached his son, Michael, for that year and into the minor leagues for the next two seasons.

In 1987 Pete took over the coaching duties in the major leagues when his youngest son, Brian, entered the program.  Pete spent 9 seasons coaching in the majors for the WLLL with the Knights of Columbus and coached on two 11-12 year old All-Star Teams.

Pete has also spent time volunteering for the Windsor Locks Youth Soccer programs.  He served as coach on numerous teams that Mike and Brian played on from 1983-1991.

Beginning in 1995 Pete has directed the programs for soccer players in grades Pre-K, K, and 1.

Pete is also known to many town residents for his loyal commitment to Windsor Locks High School Athletics.

In 1989 he helped reinstate the WLHS Athletic Booster Club.  He has served as President for the last 15 school years.  Pete has been instrumental in raising money to help support many of the school’s athletic teams.

Through his hard work and dedication, he has been able to award close to 100 scholarships to student-athletes graduating each spring.

At WLHS,  Pete can also be heard as the “Voice of the Raiders.”  He has announced home football and basketball games since 1992.

Pete has been honored by school officials as “Friend of Windsor Locks Athletics.”

Pete should also be considered the “Sire of Athletic Directors and Soccer State Champs.”

Sons Mike and Brian are both members of the WLAHOF as part of their respective State Champion Raider Soccer Teams–Mike, 1990 and Brian, 1994.  Mike is currently assistant principal and athletic director at Wethersfield High School while Brian is the athletic director captaining a flourish athletic program at Granby High School.

Pete is a life long resident of Windsor Locks and together with his wife, Karen, enjoys spending time with his sons and their wives, Michael & Kristen and Brian & Melissa, and grandchildren.

Pete Maltese is one of those rare individuals who have given his time selflessly to the young athletes of Windsor Locks both before and after his own children were participants.

Whether it’s behind the plate, announcing the game or raising scholarship money for the Booster Club, Pete has been a constant in Windsor Locks sports for 4 decades.

Pete has done it all with humor and humility; a quiet behind the scenes force helping generations of Windsor Locks athletes learn and enjoy the game.