The road to the Raiders first baseball championship was not an easy one. The 10-4 Raiders were seeded 11th out of 16 teams. 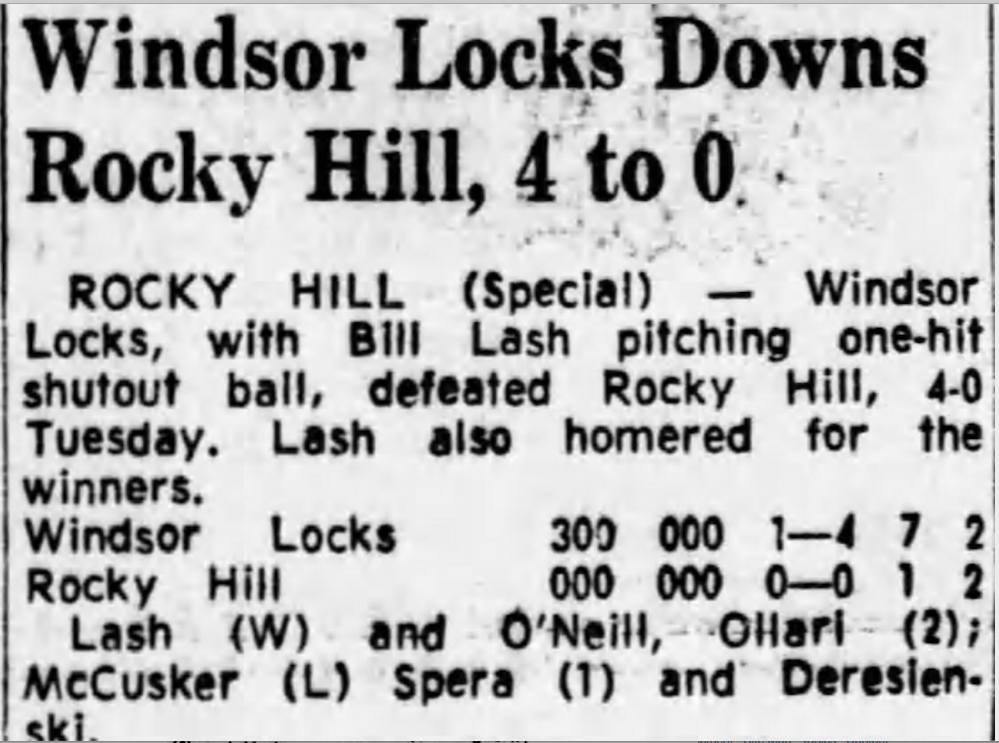 Their record might have been better if it wasn’t for an injury to star catcher Bill O’Neil. (O’Neil after the championship signed a contract with the Boston Red Sox.) In O’Neil absences the Raiders lost 3 of 4 games. 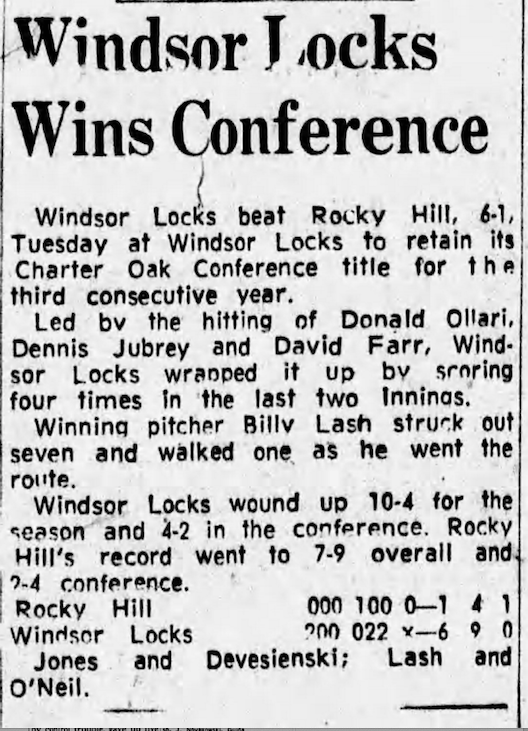 The Raiders first opponent was Guilford.  Guilford was the Shoreline Champ. The game went back and forth.  In the sixth inning with the Raiders winning 5-3, Dave Farr singled in two runs giving the Raiders a lead of 7-3, a lead that pitchers Don Ollari and Bill Lash held onto. This game will be remembered as the shoe polish game. Coach Dan Sullivan ordered the bus driver to get off the highway so they could get some shoe polish as one of his players forgot to polish his shoes. 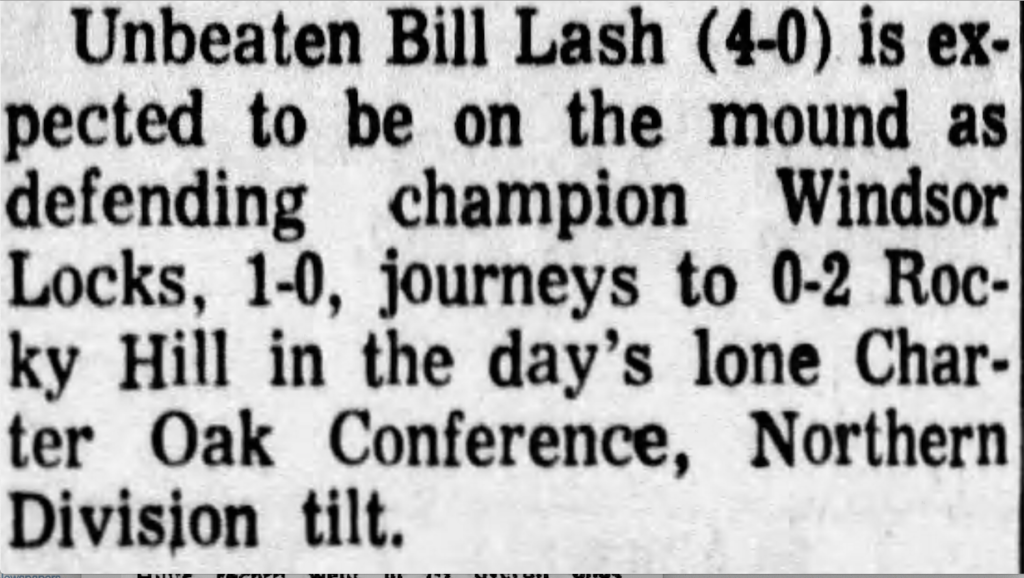 The Raiders next opponent was Farmington, the Northwest conference champ. The Raiders jumped out to a 2 run lead in the third as starting pitcher Bill Lash hit a 2 run homer.  In the fifth Dave Farr again added some insurance runs as he singled in two runs. Don Ollari relieved Bill Lash in the fifth. Farmington scored two runs in the sixth, but Ollari managed to shut them out in the seventh to advance to the state semi-finals. The Raider pitching combined to limit Farmington to 2 hits.

In the semifinals the Raiders faced St. Bernard’s. The Raiders jumped out to a 6-0 lead and hung on for a 6-3 victory. Don Ollari and Bill Lash combined for the pitching win. St. Bernards went on to win the championship in 1967.

The championship game was played on June 9th. The Raiders again faced a league champ as Middletown was the Central Valley Champ. The Raiders again were underdogs. No tournament team had scored against ace Bill Guida. His record going into the championship game was11-1. The Raiders had been lead in hitting by Guy Senia, Bill Lash, Dave Farr, Don Ollari and brothers Bill and Tom O’Neil. In the title game an unlikely hero delivered the big hit. Middletown scored 2 unearned runs in the first  inning. 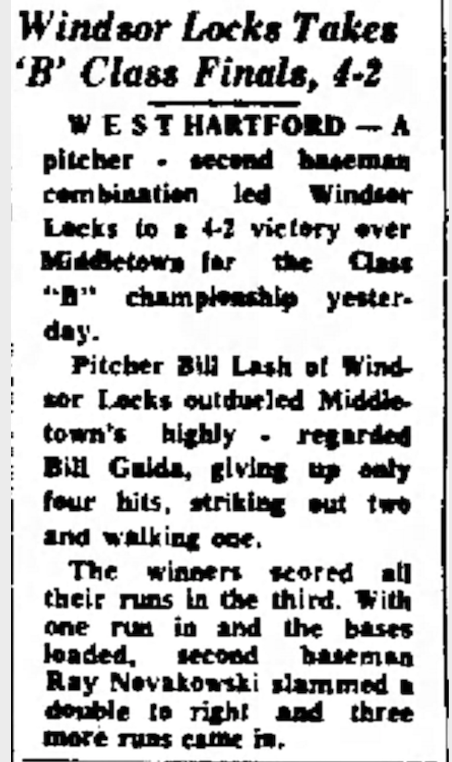 Winning pitcher Bill Lash (10-2) allowed 4 hits and then shut out Middletown the rest of the way. Guy Senia singled in the first run for the Raiders in the third inning. Then sophomore Ray Novakowski, batting eighth, delivered the big hit with 2 outs, a bases loaded clearing double as the Raiders took their first lead 4-2. Don Ollari and John Novakowski both had 2 hits for the  Raiders.

The Raiders– the Charter Oak North Champion for the third straight year– won seven in a row to finish their season 14-4 and earn WLHS their first state title in baseball. They won the game at Sterling Field, the site of the 1963 and 1964 state soccer championships. 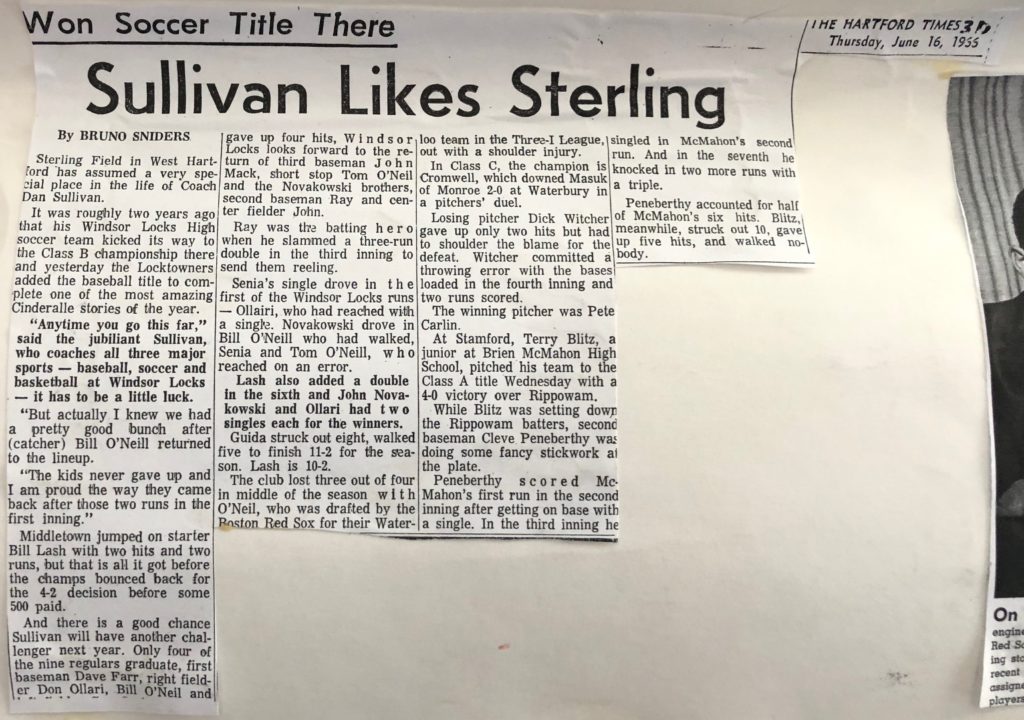